Strict Standards: Only variables should be passed by reference in /home/gravitud/public_html/ssx_forum/includes/arcade/functions_arcade.php on line 626
 The Gravitude Bar • View topic - SSX Tricky Remix

ok so, a few months back i decided i wanted to put together a solid SOLID idea for an SSX game and pray that it gets enough attention on social media to garnish some attention from EA (esp since we have some friends that work there). the goal i have in mind is not to make this an actual game but if the attention is big enough EA would see a market to bring the game back. (HOPE, PEOPLE, DREAMS... GOALS!)

so im presenting you all an idea, add your own ideas, i know over the past two or so years we've had a few other ideas and some folks even made tracks. add them! as time goes on i'll add them to the this post as one solid idea. to make it fair and idea will be inserted if at least three other people agree that it's good.

i plan on doing re-designs for all the characters. i chose them based on popularity but also the idea of the rival/bestie system. i imagine that each character will have a partner, so i wanted the cast to be an even number (20), the three new character slot is for anyone with a cool OC i can draw and throw in! 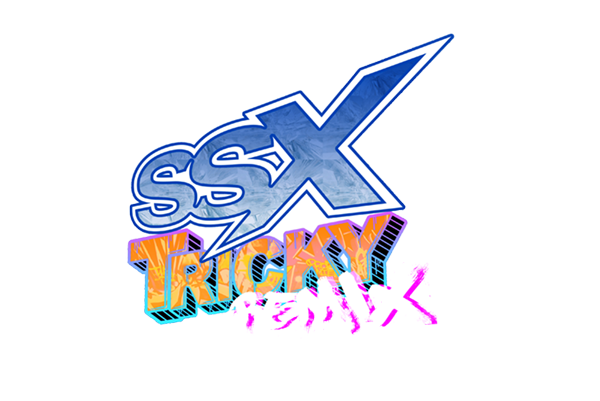 x STORY x
Bringing the worlds attention back to SSX after the deadliest descents challenges, the extreme snowboarding circuit is alive once again. Now bigger and badder than ever, it's every rider for themselves on the three huge mountains filled with numerous tracks, back country, and more. 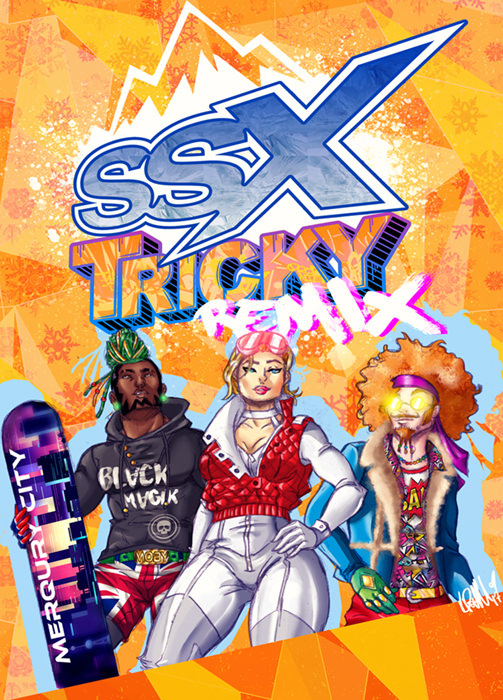 x GAMEPLAY x
The game features three new mountains with 4 peaks each with different tracks. The mountains change weather and have day/night cycles.

As in previous SSX titles, players choose one of twenty characters, participate in races or trick competitions, and earn rewards. Story mode includes lots of character interactions and cutscenes.

Returning from SSX 3, the reward system is also revamped and improved. Although some rewards are still tied to what medals the player gets, most rewards are bought using money earned in competition or when finding hidden collectibles, outfits, and stat improvements. The Lodge also returns to SSX where the characters are fully customizable with gear specific for that character.

Returning from SSX (2012), players can perform various tricks which earns them boost they can use to travel faster. By filling up the boost meter completely, players enter 'Tricky' mode, which makes a return from SSX Tricky. During this mode, players have unlimited boost and tricks will now become wilder 'Über' tricks. If players perform enough Über tricks whilst in Tricky mode, they will enter 'Super Tricky' mode, allowing for wilder Über tricks and prolonged unlimited boost, which can last longer if the player continuously performs tricks. As players perform tricks, they build up a combo bonus which goes through a multiplier once cashed in, although will be lost if the player bails. If the player makes a mistake, s/he can rewind time to get back on track, although this will cost trick points and opponents and time will continue to run normally.

x STYLE x
This game is presented in a colorful, futuristic, fun, flashy, fashionable, rave style. Items on the characters glow, and when Super Tricky is reached the board glows with matching light trails. The environment reacts and responds to the music playing, like a real life equalizer.

x SOUNDTRACK x
To Be Added

x TRACKS x
To Be Added

COUNT ME IN THIS IS SUCH A FANTASTIC IDEA
(Might add another reply later with ideas and/or tracks, ect. Might even design a few characters or so (Moon, Rik and Frank aside).
Yeti

update:
here we go, two ideas up to you if you want them

I love this idea. I've also envisioned an SSX game in a previous thread which is supposed to bring back lots of features from Tricky and 3, while adding new ones like day/night cycle and so on.

The Lodge system would be awesome if it incorporated more than just gear customization. Instead of having just one lodge, you'd have a whole village with different shops like barber saloon, tattoo parlor, snowboard-builder shop, trick-creator-arena, and so on. But the loading times should be minimal, of course!

I also feel, in addition to the mountain peaks, there should be a bunch of unlockable bonus tracks that aren't located on the peaks, sort of like easter eggs so to speak. And by that I mean updated HD versions of some classic SSX tracks like Tokyo Megaplex, Aloha Ice Jam and Alaska.

I have one idea for a character:

Laki Bjork – A charming and spiritual young woman from Iceland, born close to the volcano Laki, hence her name. Always making sure to enjoy her ride, Laki has a natural sense of speed that makes her boost through the slopes like an unstoppable force of joy. Before successfully launching her SSX career, Laki was a professional scuba diver who specialized in diving in cold waters. She has a profound interest for animals and nature, and would never set her foot in the big city. Her greatest strength is kindness and humility, which means she just can't take those snarky other riders such as Elise.

RIDER QnA
Boxers or Briefs - What are those for?
Things You Have Broken - Too many tea cups.
If You Weren\'t A Pro - Scenic spot guide
The Word - If you can be anything - be kind.

Signature Uber - Lava on the Rocks As you can see above, when it comes to Laki's style I'm primarily thinking of her in three different customizable ways.

1. Icy "princess style" with various puff jackets inspired by the arctic and Nordic countries, cute but stylish with additional fantasy-inspired accessories such as an ice scepter, among others. This could be her signature outfit.

2. Grounded, realistic animal fur clothing that gives off that "hunter" vibe, complete with additional accessories such as a wooden spear. For more reference photos, google "Forsworn armor" and you'll get what I mean.

3. Scuba diver inspired outfit, although this should be part of a bonus set that you receive after completing the most advanced tracks at the highest peak.

Love this idea! Love that you used a lot of the color orange in your artwork. SSX 2012 was too bland. A new SSX game needs to be loud and colorful.

An idea I had for story was to have 10 original characters, and then 10 all new characters. And the all new characters are one team vs the team of classic characters and these teams hate each other and there is this big rivalry between them. That could be a hook to drive the story.
Post a reply
Switch to full style